I’ve heard that some parents are so in tune with their kids that moms and dads can pick out the laugh or cry of their child from among a crowded room of children. I think the same could be said for dog parents.

Out of a rowdy PetSmart holding room in which there must have been dozens of dogs, I could immediately discern Katniss’ howling and whining as I went to pick her up from doggie day care today. Then again, she’s so loud and wild that Beethoven, even his current state—as in dead, not to mention deaf—probably could have guessed which dog was Katniss. She was so wiggly that the staffer working the dog kennel couldn’t even hold Katniss, my 42-pound German shepherd mix, long enough to get her red harness on her.

Once she saw me through the glass PetSmart door, Katniss became so overwhelmed with excitement that the poor employee trying to walk Katniss on a wimpy, thread-like leash reminded me of Santiago, the aging fisherman in “The Old Man and the Sea,” as he tried to reel in that huge marlin: completely overwhelmed.

For better or worse, I would expect nothing less from her.

Today, Jan. 12, is her birthday, one reason why she had a play day (and ice cream!) at PetSmart. Well, we think it’s her birthday, anyway: My wife and I adopted her on March 12, 2014, and the Austin Pets Alive folks said then she was about 8 weeks old. She could be older or younger for all I know, but I just chose Jan. 12¹ as the day of her birth so she would at least have a day for us to celebrate. And yes, I celebrate my dog’s birthday, as corny as it may seem, just like parents of human kids celebrate a child’s birthday. Why? Because I consider her my miracle.

I think it was a miracle, or what others might see as just a string of coincidences, that brought Katniss to us. My wife had been begging me to get a dog for a long time, but it never felt right—not until March 14, 2014, that is. If I remember correctly, someone had found a baby Katniss² and her siblings at another animal shelter, in Bastrop, according to my wife, and brought the litter to APA just in time to stop them from being euthanized. When I think of my tiny Katniss—a puppy who had yet to annoy the neighbors with her barking, swallow my wife’s engagement ring or become my shadow—not getting a chance to live, it breaks my heart. When I think of all the things that had to happen—Katniss’ biological mom and dad creating her, some kind soul bringing itty-bitty Katniss to APA, someone else not adopting her, and my wife and I deciding that day in March to get a dog, it seems miraculous to me.

As bonkers as Katniss is—pretty much 24/7—she really is a good girl and my best pal. Whenever she drives us crazy or my wife complains that I spoil Katniss, I gently remind her that at least Katniss is here for us to spoil her to begin with—she almost didn’t make it³.

So as we celebrate her birthday and hope she’ll be exhausted from playing all day at PetSmart, we look forward to another year with our happy, healthy miracle/coincidence. Yes, I spoil her, and yes, I know she is a dog, but she’s also the creature that won’t leave my side when I feel sad, makes me laugh, and forces me to get off my increasingly large butt and be active to take her on walks.

Maybe now she’s the one saving me?

¹Not only do Katniss and I share her dog hair—it’s everywhere—along with a house and occasionally sleeping space (she loves to hop up on the bed and snooze), we also share a birthday month as our birthdays are a week apart. I can’t get away from her!

²Who am I kidding? She’s still a baby. 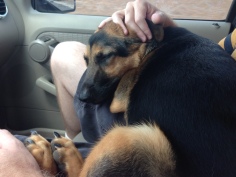 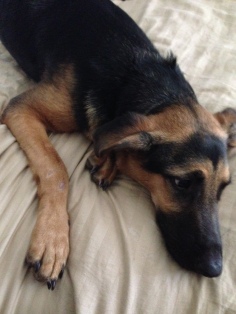 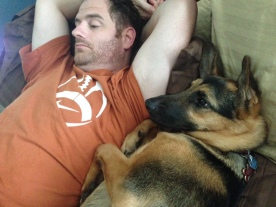 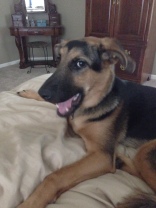 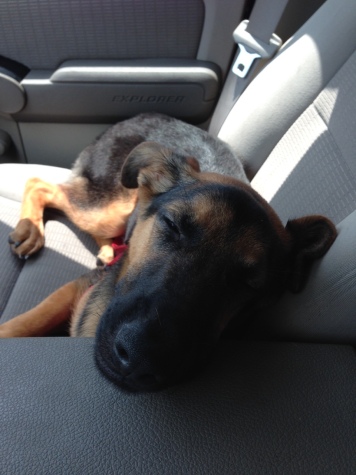 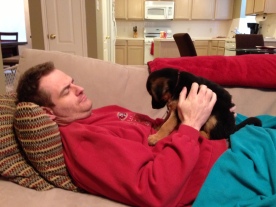